Finally, berries, Berries, BERRIES...EVERYWHERE!  This has been a horrible summer and I'm not gonna lie, fruits and veggies haven't been so great, even from the farmer's market.  How do you fix a bad berry?  Make a berry crisp! 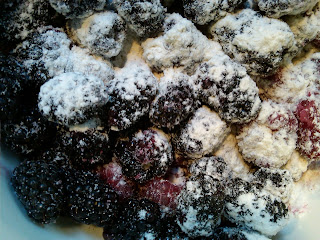 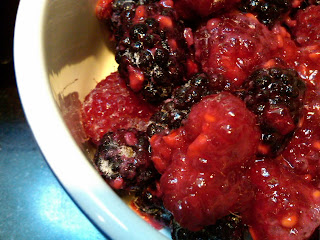 Berry crisp is so easy, I never use a recipe.  Well, as I've said before, HE loves a good recipe.  A few years ago, I chased down Tom Douglas at Costco and asked if he could sign a copy of his cookbook Tom Douglas' Seattle Kitchen and he did, so I gave it to John for his birthday.  OK, has he made anything out of it, yes, crab cakes.  Anything else...no, until now.  The recipe for "Peak-of-Summer Berry Crisp" is perfect.   YUMMY!!!﻿ ﻿I usually mix sugar to berries and then top my crisp with a blend of brown sugar, cinnamon, butter and oats...never the same.  OK, the recipe in Tom Douglas' book  (page 220) starts with flour and sugar mixed into the berries first, then topped with a blend of oats, brown sugar, flour, cinnamon, and butter.  In the book, the crisp is made in a 9-inch pie pan, but HE made HIS version in an assortment of different sizes of ramekins.  YUMMY-YUM-YUM-YUM!!!

So, the good news is HE has made other recipes from the Tom Douglas cookbook.  I'll tell you about them later!

Breakfast on the Beach

I love those little blue boxes!